Graduation up in the air for Briercrest senior athletes 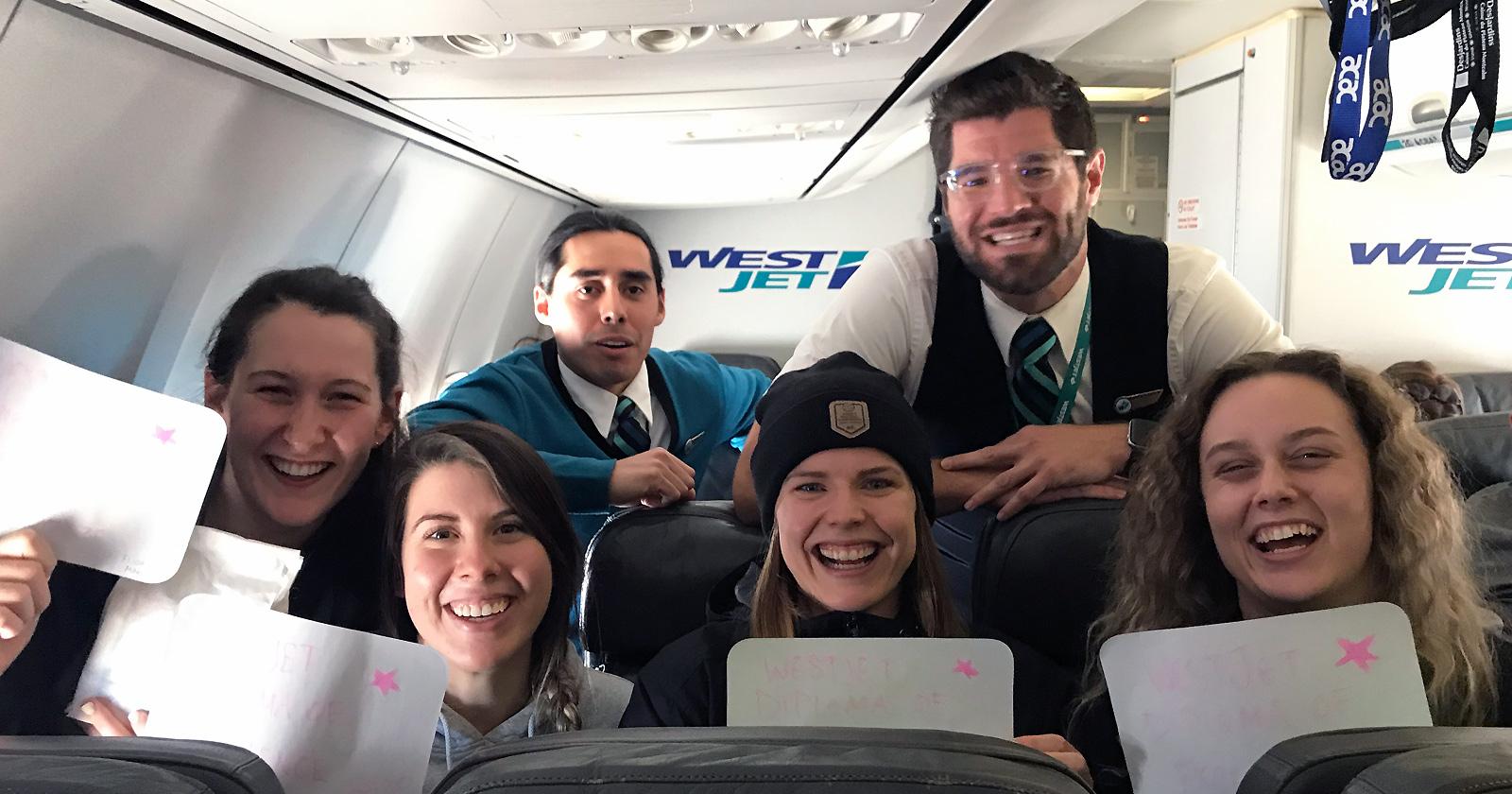 Four fifth-year Clippers can now add “celebrated grad at 40,000 feet” to their list of experiences as Briercrest athletes.

Amidst anxieties about the COVID-19 pandemic, the Briercrest Clippers Women’s Volleyball team, including senior athletes Ashley Erickson, Rebecca Garner, Kirsty Kindrachuk, and Elicia Wiebe, were on a West Jet flight back to school after the CCAA National Women’s Volleyball Championships in Québec City.

Just hours earlier, Briercrest College and Seminary had been forced to suspend on-campus education, moving all classes online beginning Monday, March 16, and leaving the College graduation ceremony scheduled for April 17–18 up in the air.

“It was a whirlwind of finishing our volleyball careers and then that night finding out that school was closing for the rest of the year and we were going to have to do online classes,” said Ashley Erickson.

She had been named the CCAA Women’s Volleyball Player of the Year just days earlier, and Garner had been selected as a CCAA National Championship All-Star and the winner of the Chuck Gillickson Exemplary Leadership Award.

Erickson added that the developments were difficult for the senior athletes to process as they faced not only the end of their season, but also the sudden end of their athletic and academic careers at Briercrest College.

“No grad ceremony, no athletic banquet, everything was an abrupt ending from that day.”

That’s when the team’s chaplain, Joelle Epp, stepped in.

“[Epp] mentioned to two of the flight attendants that our school was going online and that our four fifth-year graduating athletes would not have a graduation ceremony at the end of this school year,” said Garner.

“As soon as they heard her say that, they got so excited and started asking us to write down the degrees we would be receiving. About 5 minutes later they started our impromptu, 39,000 feet above ground, graduation ceremony.”

Using the on-flight announcement system, the crew of West Jet flight 655 called out the names and diplomas of each senior player, humming “Pomp and Circumstance” as they walked the center aisle to receive homemade diplomas that read “West Jet Diploma of Excellence.”

The crew got creative, giving each player a barf bag full of treats. Champagne was also offered, which the players declined. As students at Briercrest College, they’ve signed a community life code that requires them to not consume alcohol on or off campus during the school year.

The athletes were blown away by this simple act of kindness. “It was honestly the sweetest act during such a confusing and changing time in our lives,” said Kindrachuk. “But as small and impromptu [as] the ‘ceremony’ may have been, it was so kind that they took the time to do something out of the ordinary and celebrate with us during a flight,” said Kindrachuk. 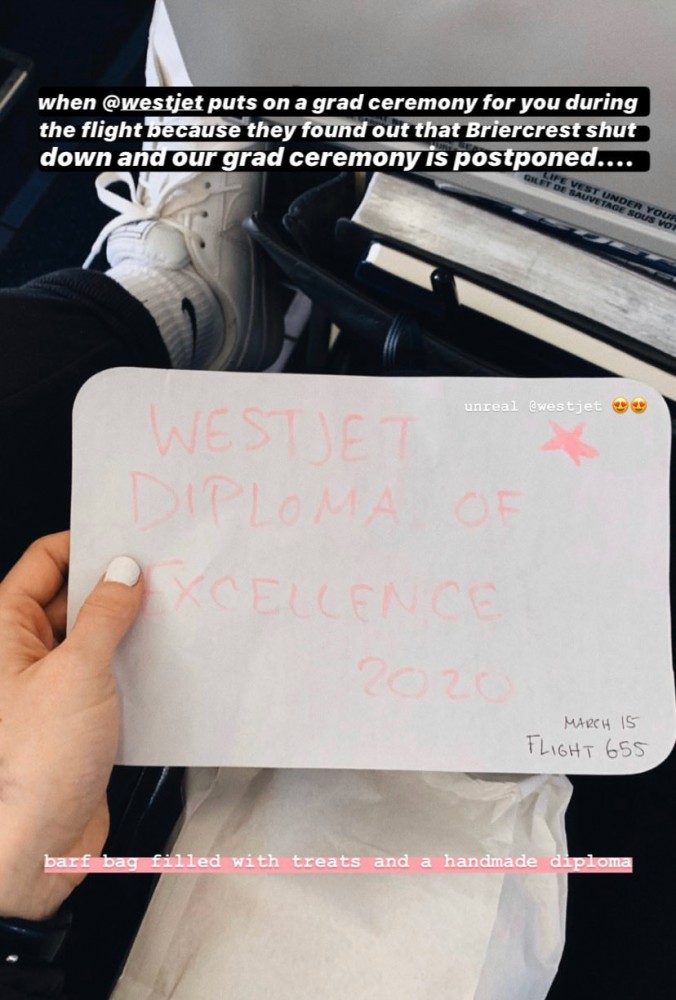 “The four of us felt extremely blessed to experience that, and we need to recognize these small acts of kind customer service that make people feel valued and important during times like these!”

Although on-campus has been suspended for the foreseeable future, the girls will walk the stage at Briercrest with their graduating class at a re-scheduled ceremony this fall.

“We are very excited about graduation and want to celebrate it with all of our graduates. We're not able to do it now, so we're just going to postpone to the fall, and try to make it a very special event and maybe add some extra things to it, in fact,” said Don Taylor, Dean of Briercrest College.

Although dates and details are still being worked out, Taylor said that one detail is certain: the crew of West Jet flight 655 will have an open invitation to attend Briercrest’s celebration on the ground in Caronport, Saskatchewan.

For more updates on how Briercrest is responding to the COVID-19 pandemic, please visit www.briercrest.ca/coronavirus.

My experience at Briercrest was great—they were flexible with my busy schedule, affordable, and practical. The courses directly impacted my ministry and help me leverage the call in my life to where I am today.
Andy Gabruch (Seminary)
Start your application